Global injustices in the payment of electricity

Global injustices in the payment of electricity

Full article link: https://doi.org/10.1016/j.jclepro.2022.130797
This new scientific article carried out collaboratively by members of Hegoa Institute for Development Studies and International Cooperation, Ekopol research group and Life Cycle Thinking Group, all belonging to the University of the Basque Country UPV/EHU, shows for the first time the injustices of paying for electricity in today’s globalised world. 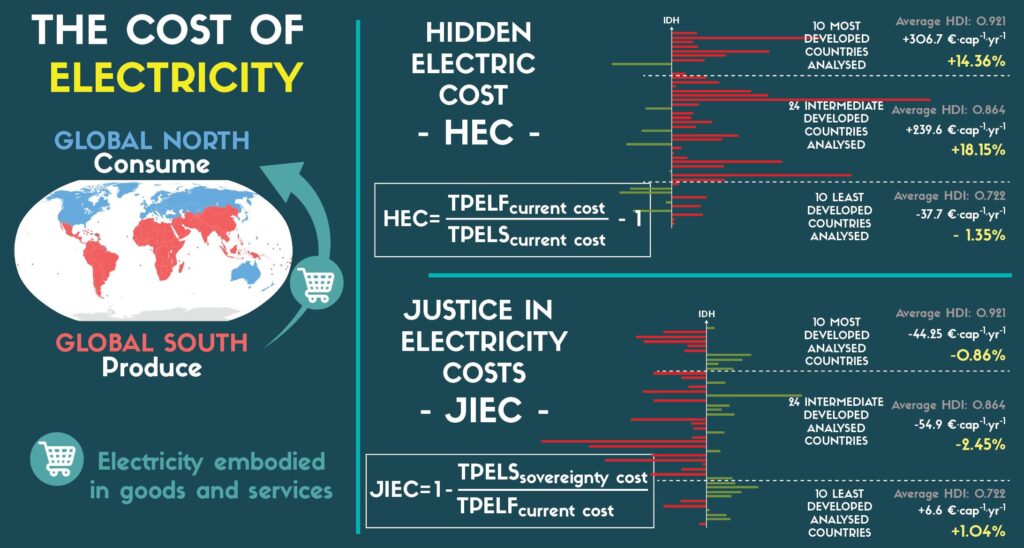 Given the massive outsourcing of the production of goods and services in developed countries, more and more electricity it is being consumed outside the countries of the Global North. In addition, as a general rule, the electricity in developing countries is paid for at a lower price, limiting the ability of these countries to invest in installing a socio-environmentally sustainable energy model. In this study, on the one hand, the Hidden Electric Costs (HEC) of 44 countries (43 specific countries and the Rest of the World region) have been measured. In other words, the difference between what is paid nationally per person and per year for electricity consumed directly in the country has been compared with the footprint of the country’s inhabitants, taking into account the consumption embodied in the imported products and services. On the other hand, the price that the inhabitants of
each country would have to pay if all imported goods and services were  anufactured at the price of national electricity has been also measured, and thus the injustices existing in payments for electricity have been estimated.
This second indicator has been defined as Justice in electricity Costs (JIEC).
In conclusion, it has been observed that the 10 most developed countries consume on average 14.36% more electricity than the declared nationally, and the 10 least developed countries consume 1.35% less energy than their national accounts show. On the other hand, it has been measured that the 10 most developed countries and the 24 intermediate ones pay between 44.3 € and 54.9 € per capita less than what they should pay for all the energy they import embodied in goods and services from other generally less developed countries. The global average in the payment of electric footprint is 1858.3 € per capita and year, values for specific countries varying from 204.3 € in India to 5443.8 € in Australia.
These two indicators are a step towards measuring global electricity inequities, in order to move towards a more just energy transition at the global level and to push for appropriate policies.
The first author of this article, María San Salvador Valle, has been awarded with the VIII Solidarity Engineering Prize. The project has been led by professors Ortzi Akizu-Gardoki, Gorka Bueno and Roberto Bermejo.