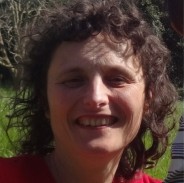 Rosa Lago Aurrekoetxea received the B. S. degree in Physics from University of Basque Country in 1995, and the PhD. Degree in Physics from the Technical University of Madrid (Instituto de Energía Solar, IES-UPM) in 2002, in the field of photovoltaic silicon solar cells. From 2002 to 2013, she researched on photovoltaics as a member of the Instituto de Tecnología Microelectrónica (TiM, UPV/EHU). From 2013 to 2018, she was a member of Parte Hartuz (UPV/EHU).
In 2002, she joined the School of Engineering of Bilbao (UPV/EHU), where she is currently an associate professor.
From 2011 she is a member of Ekopol in the fields of ecological debt (global North in debt with the global South with a focus on fossil fuels exploitation) and energy transition to renewable sources.